Whether you look at the IoT, industrial, consumer, or medical markets, there are always applications where less power consumption is needed. This is especially of more importance when the end product is a portable device which requires a battery to power up the system. Users don’t want to go through the hassle of charging their devices every few hours. Ideally, they would like to not charge their devices at all! But, of course, this is not realistic. Instead, companies and their designers must try to get as close as possible to this ideal scenario by creating long-lasting digital systems. And while it’s easy to say, it’s certainly not easy to do. There are different points which need to be taken in consideration to achieve the minimum battery life requirements.

In general, there are three main driving forces which are making companies think more about power efficiency in their products.

Ultimately, these are all requirements from customers and, if a product can meet these requirements, users will indeed be happy.

The question now is, “How can companies achieve such countering requirements?”

One of the most important decisions to be made is in choosing parts which will be integrated into the solution. System designers will be looking for the parts which consume the least amount of power in the market.

For instance, they’ll be looking at microcontrollers which optionally can go into sleep mode with a very low current consumption while they’re not being used. A silly but accurate analogy would be when mothers would tell us to turn off the lights after leaving our rooms. There’s no point in having the lights on when there’s no one in the room, since it wastes precious energy. The same applies to microcontrollers. When it’s not being used, it’s better to put it in sleep mode to help preserve the battery. The MAX32660 Arm® Cortex®-M4F microcontroller is a good example of an energy-efficient device, since it consumes just 630nA at its deepest power mode.

In applications where the system is exposed to temperature variability during operation, it will also matter to look at components which have a relatively independent current consumption from temperature. The MAX40007 nanoPower op amp has a variation of 300nA over its operational temperature range. This is a very small variance considering it has a wide operable range from -40˚C to 125˚C.

Designers also have to think about products which require long shelf life. In those cases, quiescent current must be very low since that’s the current that is being consumed when the device is at an idle state. If the quiescent current is too high, the battery will die before a user can turn on the device. The MAX17222 nanoPower synchronous boost converter provides just that with 300nA quiescent supply current.

And, sometimes, just ensuring that the device’s typical current consumption is low is all designers need to consider. The MAX9119 nanoPower comparator is a device which consumes only 350nA at room temperature. There’s also the MAX9634 nanoPower current-sense amp, which only draws 500nA at the same temperature. This ultra-low power consumption doesn’t sacrifice precision or speed, which gives the best of both worlds: high performance and efficiency.

You might see a nanoPower theme here. Over the years, Maxim’s engineers have continued to develop solutions that meet the market’s high-efficiency demands, and nanoPower technology, with its very low quiescent current, is one of the outcomes.

And while you’re at it, get yourself a MAXNANOPWRBD# evaluation kit, which brings together several nanoPower components that showcase the technology. This board is a simple digital multimeter application example running on a single 1.5V alkaline button cell. All the components mentioned earlier are integrated in this board: 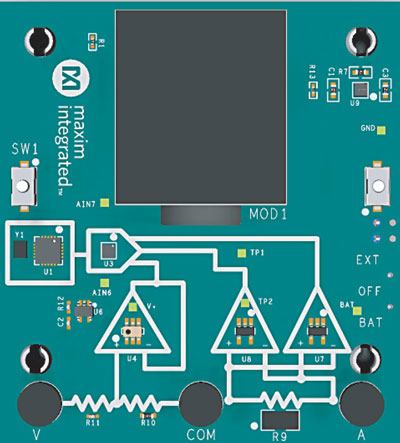 MAXNANOPWRBD# provides a fully assembled and tested kit for evaluating an array of ultra-low-power ICs.